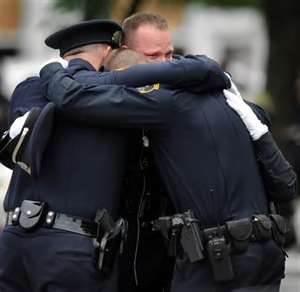 So tired of commentators trying to dance around the truth that Mayor DeBlasio and Al Sharpton have riled up people to the point that violence against police officers is acceptable – even noble.  Many people may not remember the days of the BLA and others killing 23 officers in two years in New York, but I do.  These were men and women who were doing their jobs.  Just like any secretary or corporate executive in New York.  The only difference is that they put their lives on the line every day with a target on their backs.  Is this going to be the case again?  Here is what I consider an appropriate reaction to DeBlasio’s scathing belittlement of the NYPD last week that, in my opinion, contributed to the deaths of Officers Rafael Ramos and Wenjian Liu last night:

Prayers to their families and to the NYPD.  This was senseless, but I am not going to hold my breath waiting for Sharpton or DeBlasio to admit that they were wrong.  I am not delusional and realize DeBlasio is so stuck on himself that the idea of resigning wouldn’t even cross his mind.  I just hope neither of them are stupid enough to try to attend the funerals even though I believe their egos will get the best of them in the end…

4 thoughts on “Victims of Political Ignorance…”