I almost feel as though I am writing a plot outline for one of my “creepy little stories”, but no. A lot of thought has gone into a theory I have regarding the sudden, massive influx of illegals crossing our southern border. A theory as to why so many of them are children. A theory as to why so many of those children are either ill, or carriers of illness. Some may lump this in with the much over-used category of “conspiracy theories”. So be it. (If one recalls the plot of that movie, Mel Gibson’s character was proven right.)

Note the increase of military-style equipment being gifted to local Police Departments throughout the nation. Note the reports of violent gang activity are increasing in many of our most troubled cities. (How can our government give away so much equipment, yet can’t seem to find the funds to keep the military men and women they just fired? Hmmm.) Then, note the route map for drug trafficking by Mexican cartels from Mexico to those very cities where gang activity is high (see below). Also note that the National Guard has been called in to assist Chicago Police (complete with vehicles and specialized weaponry), yet the Mayor of Chicago has mentioned again and again that deaths from gang violence has decreased. Reporting may have increased, but the actual number of deaths has gone down – or so they say.

Where do the children fit into all of this, you ask? Well, knowing that even though Americans can feel the government stepping on our last nerve, we are a compassionate people. We empathize with the plight of young children thrust by their own parents into a world they do not know and cannot fathom placing a 3 or 4 year old on a plane, alone, without being sure that they will be reunited with family when they land in their home countries. And who’s to say they won’t be sent right back here again. So our Border Patrol becomes the Nanny Service for the Nanny State created by Barry and his hangers-on. While they are preoccupied with finding facilities to place the children, processing the 300 or so who cross the Rio Grande daily and tending to their basic needs, the cartels slither through with their drugs and/or guns to supply the gangs along their routes. See where I’m going with this? No? You will.

It has already been noted (through reports and photographs) that many of the 13 to 17 year olds who fall under the “unaccompanied minors” exception to our Border Law (yeah, like we enforce that law anyway) are either members or affiliates of MS13 and/or M18 – two of the most dangerous gangs in the world, if not THE most dangerous. It is said they are busy recruiting others while they wait to be transported out of the Texas holding facility. Now the gangs will become stronger because of the new blood being added to their crews. More gang activity, less order. More gang activity, more crime. Since the cartels will conceivably be able to move more drugs into our inner cities and small towns, fighting amongst gangs could cause turf wars – more chaos. They will fight for a bigger share of the revenue from drug sales.

Cities like Detroit are already struggling to provide fire, emergency medical and police protections. Add in young children with illnesses not seen in America since before I was born (1960, in case you care) who have nowhere to live, no money for food and the “right” to attend public schools and our already heavily burdened areas will have no funds to fight back against the gangs. You’re beginning to say “I kinda get it now!” aren’t you?

Welcome the new toys provided courtesy of Uncle Sam and the National Guard troops to fill the voids in personnel at many Police Departments. Perhaps curfews are enacted. Perhaps troops will patrol the streets 24/7. Let’s say that the gang wars get so bad that Marshall Law becomes “necessary”. Since the National Guard is so busy around the country putting out fires begun by our favorite little political arsonist, Barack, the cartels just keep sliding through.

This tactic may push the gangs into areas where the worst thing one had to worry about was stepping in a cow pie with your Sunday shoes on. Oh, I know, there are meth labs all over the country. However, the ones in deeply rural America are usually run by locals. Many towns don’t have enough people to start a game of poker, let alone a gang. Imagine what a migration of gang members to Where the Fuck Am I?, Nevada would do to those residents. So, does the American government then don its Captain America cloak and come to their rescue the way they might the inner cities? Perhaps.

Just as the scabies carried by the children crossing the border is highly contagious, so is the government’s lust for control over all it sees – or so it seems to me. Just sayin’… 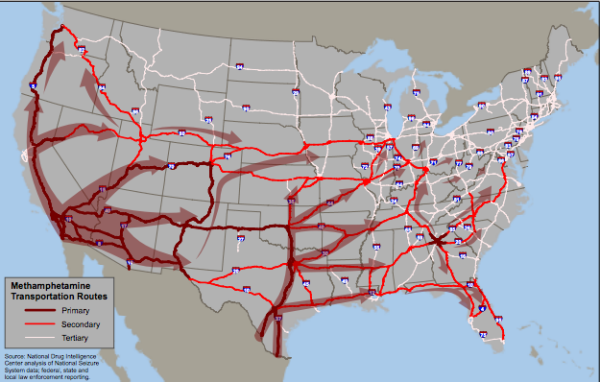