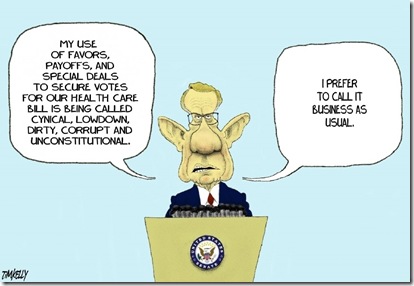 Looks like Senator Harry Reid will need to go to yoga classes.  He’s going to have to learn the “Bend over, put your head between your legs and KISS YOUR ASS GOOD-BYE!” position pretty damned quick.

Even though the Anointed One accepted Harry’s apology (purely for the sake of party unity, I’m sure), I don’t think the voters in Nevada will be so kind.  In their book Game Change Unabridged, John Heilemann and Mark Halperin reported the following:

Reid “was wowed by Obama’s oratorical gifts and believed that the country was ready to embrace a black presidential candidate, especially one such as Obama — a ‘light-skinned’ African American ‘with no Negro dialect, unless he wanted to have one,’ as he said privately.

Isn’t it funny how Obama’s typical “rush to judgment” tendencies were on vacation when that little faux pax by Reid was made public, but he instantly came to the conclusion that Cambridge Police “acted stupidly”.  Seems to me that Harry Reid’s comments were racist, period.  No investigation necessary.  Talk about “acting stupidly”.

Even my “favorite” little Liberal, Janeane Garofalo, has been remarkably quiet.  I fully expected to see her plastered all over the news crying foul against Harry.  After all, she has an uncanny ability to sniff out racism in places it doesn’t exist.  Here’s a no brainer, sweetie.  What?  No snarky Harry Reid jokes?

Racial remarks seem to be running rampant in the Democrat’s upper echelon.  According to Heilemann and Halperin, the ever-entertaining former President Hillary’s Husband is guilty:

[A]s Hillary bungled Caroline, Bill’s handling of Ted was even worse. The day after Iowa, he phoned Kennedy and pressed for an endorsement, making the case for his wife. But Bill then went on, belittling Obama in a manner that deeply offended Kennedy. Recounting the conversation later to a friend, Teddy fumed that Clinton had said, A few years ago, this guy would have been getting us coffee.

Hmmm, Billy.  Would he have been doing that from above or below the desk? 😉

Since Teddy is dead (oh, and by the way, so is Michael Jackson…in case you hadn’t heard…yup…still dead…), there is really no way to confirm whether or not these comments were actually made.  I tend to believe it, though, since they were spot-on about Harry.

I know my Liberal friends (and family) will be quick to point out that this book also contains stories about Cindy McCain,  Sarah Palin and others in the Republican party.  I can’t wait to read those myself.  However, my focus is on the two-faced attitude in Washington today.  The Dems have ripped Michael Steele for being an “Uncle Tom”, called Tea Party Protestors “redneck racists”, and taken every opportunity to attack any anti-Anointed One comment as racially motivated.  You see, we can’t just disagree with Obama because his policies are ridiculous.  There has to be some sort of ulterior motive.  We can’t possibly oppose his ideology and want an intellectual debate about the issues.  We must have a racial agenda (and white sheets hanging in our closets, if you listen to Janeane).

Two-faced party-line politics such as this do qualify as one of the Anointed One’s “teachable moments”.  I have learned that, more than ever before, we need to vote them all (Democrats, Republicans and Independents alike) out of office and start with a clean slate.

1 thought on “Just Wild About Harry?”