I have a Jack Russell Terrier.  I know, I know…condolences will be accepted in my “Leave a Comment” box.  He is basically a cool dog.  Not only is he a Jack Russell, he is deaf.  Which, doesn’t make a difference when you are talking about the Parson’s Jack Russell…they don’t listen anyway. 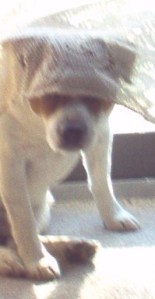 “How does this relate to politics?”, you ask.  Well, let’s pretend Kim Jong Il is a Jack Russell.  Small dog in a big dog’s world.  Desperately striving to be taller (note the pompadour and the platform shoes), desperately trying to be taken seriously (note the underground detonation of a nuclear bomb and the subsequent launching of two missiles).  If I were the President of the United States of America, I would make my response short, sweet and doggie-friendly…

The United States Of America 😉